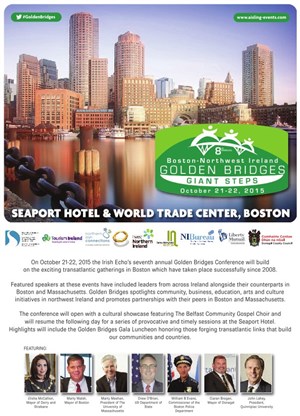 On 21-22 October 2015 the seventh annual Golden Bridges Conference built on the Golden Bridges gatherings in Boston which have taken since 2008. Featured speakers at these events have included leaders from both sides of the Irish Border alongside their counterparts in Boston and Massachusetts.

The conference highlighted community, business, education, arts and culture in northwest Ireland with their peers in Boston. The conference opened with a cultural showcase featuring The Belfast Community Gospel Choir and Kaz Hawkins and the following day had a series of provocative and timely sessions at the Seaport Hotel.

*Golden Bridges 2016 dates and venue to be announced soon!*

[Not a valid template]