All Events  ›  The Homecoming and Belfast One City Conference 2015

The Homecoming and Belfast One City Conference 2015 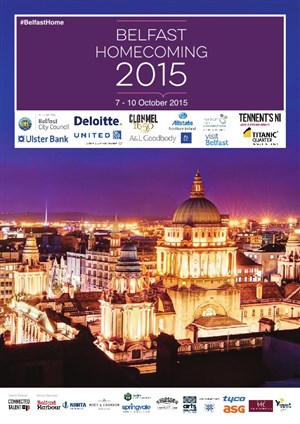 See video below for footage of last year’s Homecoming Event:

Come visit us for the Belfast Homecoming from 7-10 October 2015. The inaugural Homecoming was both outstanding and inspirational.

In September 2014, Belfast went where no other Irish city has ever gone by convening our very own Homecoming. 50 leaders of the global Irish and Ulster-Scots diaspora – led by a big city mayor, a Silicon Valley entrepreneur and a brigadier general – joined us in the conversation about how best to build the peace.

But now, as you’d expect from a city on the rise, we’re raising the bar and inviting 150 diaspora leaders to come join us for the Belfast Homecoming 2015. We promise to astonish and inspire you at every turn by introducing you to the bridge builders and civic champions who are transforming Belfast into a beacon of peace, prosperity and diversity.

We promise that the busy three-day agenda of visits, discussions and debates which we are lining up will be productive and exhilarating but most of all it’ll be fun. And when you leave, you can be sure that your partnership with Belfast is only starting.

Belfast is rolling out the red carpet, put 7-10 October 2015 in your diary and come join us!

no images were found