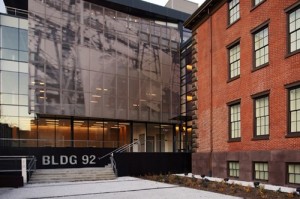 The mission of the Brooklyn Navy Yard Center at BLDG 92 is to celebrate the Navy Yard’s past, present and future, and to promote the role the Yard and its tenants play as an engine for job creation and sustainable urban industrial growth. By providing access to exhibits, public tours, educational programs, archival resources and workforce development services, BLDG 92 reinforces the Yard’s unique bonds with the community and inspires future generations to become industrial innovators and entrepreneurs.

The Brooklyn Navy Yard, located in New York City along the East River in Wallabout Basin, was one of the most active and innovative military shipbuilding facilities in the United States. During the Revolutionary War, the site was the anchorage of the notorious British prison ships, on which an estimated 11,000 American patriots and other prisoners died under horrific conditions.

Commissioned by the U.S. Navy in 1801, the Yard was in continuous operation until 1966, playing a crucial role in American naval, industrial, and cultural history, re-inventing itself time and again in response to the military, economic, technological, and social forces affecting the nation as a whole. At its height during World War II, the Yard’s achievements can be described without exaggeration as heroic. 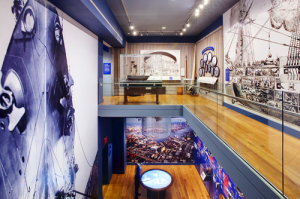 Building 92, the former Marine Commandant’s residence, designed in 1857 by the fourth architect of the U.S. Capitol, Thomas U. Walter, serves as the Yard’s public face, gateway, and ambassador, and home of the first major exhibition to tell the story of the Yard. After the federal government decommissioned the Yard in 1966, the stately building sank into advanced disrepair. BNYDC seized the opportunity to save the historic structure for an exemplary demonstration of creative adaptive reuse. The new design weds the renovated historic structure to a 4-story modern extension that houses BNYDC’s Employment Center, leasable space, classrooms and meeting/event space. The entire site has received LEED Certification- Platinum Status from the US Green Buildings Council, the highest designiation for sustainable buildings.